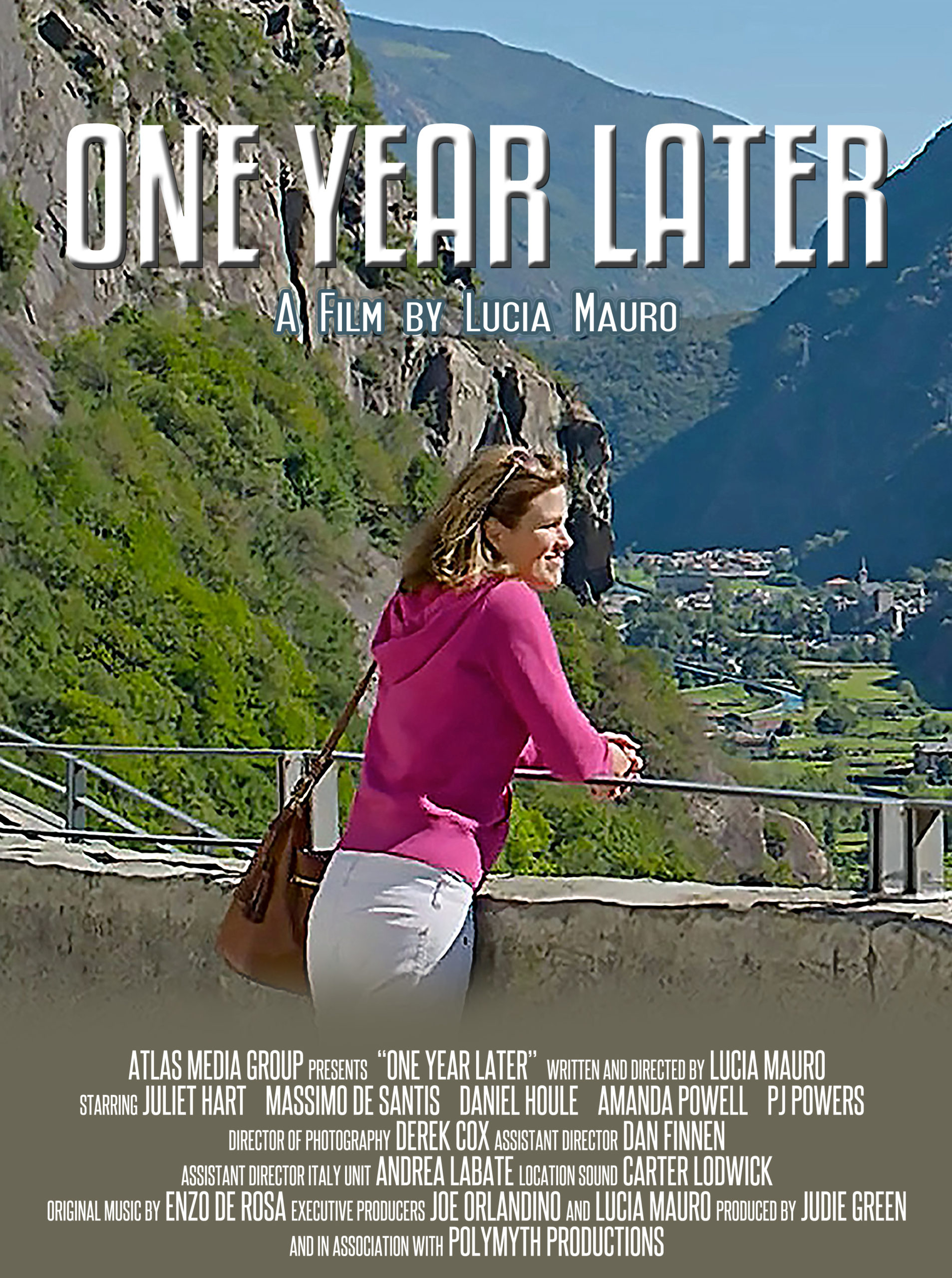 Hayward, WI – August 23, 2021 –– September is National Ovarian Cancer Awareness Month and the Ovarian Cancer Symptom Awareness (OCSA) organization of Hayward presents a Northwoods screening of One Year Later on Thursday, Sept. 23 at The Park Center. The special fundraising event includes a personal introduction by Chicago writer-director Lucia Mauro, whose movie was inspired by her own life’s experience as a three-time ovarian cancer survivor.

Mauro’s one-hour original narrative film centers on an American woman who takes a cathartic trip to the Italian Alps one year after completing cancer treatment. Humorous and uplifting, it shows how the protagonist finds her space and becomes a new person who chooses to lead a fulfilling life changed by, but not defined by, illness.

“I insisted on crafting an uplifting film that moves beyond the clinical aspects of cancer,” says Mauro, who found that writing the script during chemotherapy helped in her own healing. “Unlike many films in that genre, One Year Later is not set exclusively in a hospital following the protagonist through treatment. Instead, it moves out of the physicality of cancer and into a rejuvenating world of the emotions, the senses and human connection.”

The film is set in Chicago, as well as Milan, Turin and Aosta, Italy. Her nonprofit, In My Brother’s Shoes, Inc., co-founded with her husband Joe Orlandino, is dedicated to encouraging dialogue and a sense of community — through live screenings — around films that center on healing, resilience and human connection. Mauro’s organization also raises funds for organizations dedicated to veterans, cancer research and support, and humanitarian efforts.

Cancer survivors, families affected by cancer and those interested in mental health related to medical issues will appreciate the upbeat message delivered by Mauro’s film.

“By sharing the story Lucia captures on film, and by sharing with the audience the silent symptoms of ovarian cancer, we can help alert women and their families to those symptoms. Early detection of disease is essential in saving lives,” says Vallie Szymanski, OCSA’s co-founder and executive vice president.

OCSA has built a unique One Health awareness campaign approach tied to the human-animal bond and the veterinary community. As a result, it helps support efforts of the Penn Vet Working Dog Center’s ovarian cancer detection program by sponsoring a veterinary student intern working with the program that is ‘sniffing out ovarian cancer’ in an effort to identify odorant chemical properties that can help scientists create an effective diagnostic test for the disease.

The film is presented by OCSA and supporting community businesses including Don Johnson Motors, Rock Creek Townhomes & Apartments and more.

About the Ovarian Cancer Symptom Awareness Organization (OCSA)
OCSA is a Section 501 (c) (3) charitable organization founded in 2010 to educate women and their families about the silent symptoms of ovarian cancer and the need for early detection and treatment. Donations to OCSA are tax deductible as a charitable gift. For questions concerning tax deductibility, please consult a tax advisor. For more information, follow on Facebook @ocsachicagoorg or visit www.ovariancancersymptomawareness.org. Donations to OCSA are deductible as a charitable gift. See a tax advisor with questions concerning tax deductibility.

About Lucia Mauro
Before telling stories through film, Lucia Mauro was a longtime Chicago theater and dance critic, arts journalist, speaker, educator and photographer. Her 2014 short film, In My Brother’s Shoes, starring Danny McCarthy (Boardwalk Empire, Elvis & Nixon) as a man who honors his fallen U.S. Marine brother by taking a pilgrimage to Rome in his sibling’s combat boots, was awarded Best Short Film at the 2015 Mirabile Dictu Catholic Film Festival at the Vatican. It also was featured in the 2015 Cannes Film Festival’s Short Film Corner. Lucia is the writer-director of the 2016 feature, One Year Later, about an American woman who takes a cathartic trip to the Italian Alps one year after completing cancer treatment. It was nominated for Best Original Score at Montreal’s Views of the World Film & Music Festival and is shown to cancer support groups. Her poetic 2017 documentary, Frances Xavier Cabrini: The People’s Saint – about the great humanitarian and patroness of immigrants filmed during the Saint’s Centenary Year – was an Official Selection of the Catholic Film Festival in Seoul, South Korea, and is presented to parishes, schools and immigration museums. Lucia’s original Italy-set narrative, Voci del diario (Entries), contemplates the life cycle through one man and his journals at different phases of his life. It was a Best Drama Finalist at the 2020 Fotofilm International Short Film Festival in Istanbul, Turkey. Her documentary, I Have a Name, in partnership with The Chicago HELP Initiative, highlights organizations that nourish on many levels those experiencing homelessness. It was named Best Documentary at the 2020 Mirabile Dictu Catholic Film Festival at the Vatican and received the Silver Award at Atlanta’s Spotlight Documentary Film Festival. She is currently in production for her documentary, The Loneliest Road, inspired by Silvio Manno’s book, Charcoal and Blood: Italian Immigrants in Eureka, NV and the Fish Creek Massacre. It chronicles the multiethnic communities that shaped the American West during the early years of mining. Lucia and her husband, producer Joe Orlandino, founded the non-profit film production company, In My Brother’s Shoes, Inc., in 2014 to create and share films about healing, resilience and human connection. They are also the co-producers of the dramatic feature, Rain Beau’s End (with Ed Asner and Sean Young), released internationally in 2021.

Ovarian Cancer Diagnosis and Treatment: In 2012, Lucia was diagnosed with ovarian cancer (Stage 2B). In 2014 and 2016, she experienced separate recurrences. Her treatment has encompassed six surgeries, chemotherapy, radiation and an immunotherapy clinical trial. Through it all, she credits her husband Joe Orlandino with encouraging her to fulfill her filmmaking dreams. She continues to set new goals for herself and keeps moving forward. 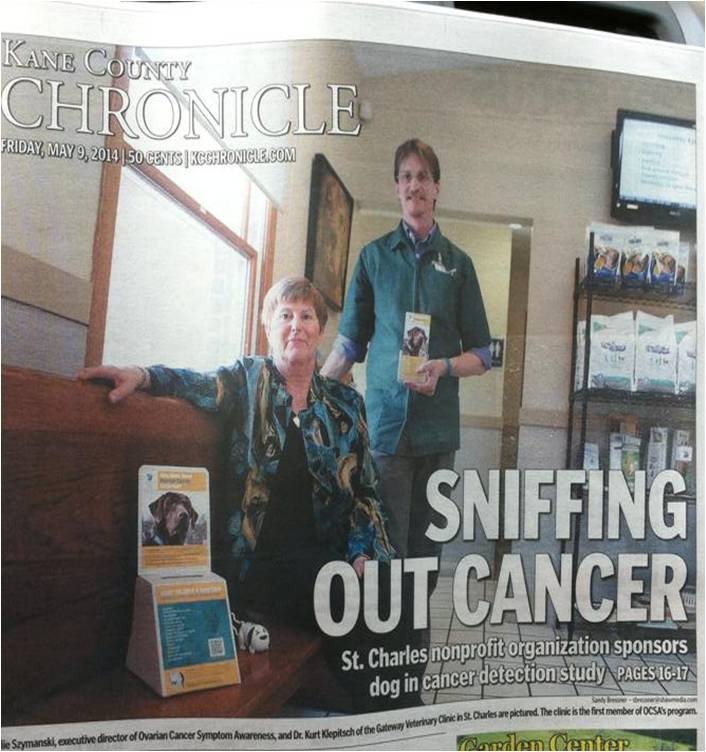 The St. Charles-based nonprofit – which seeks to expand public awareness of the symptoms of ovarian cancer in an effort to contribute to early detection of the deadly disease – is sponsoring Ohlin, a chocolate Labrador retriever participating in a cancer detection study.

on the NBC nightly news with Brian Williams. Get the story here! 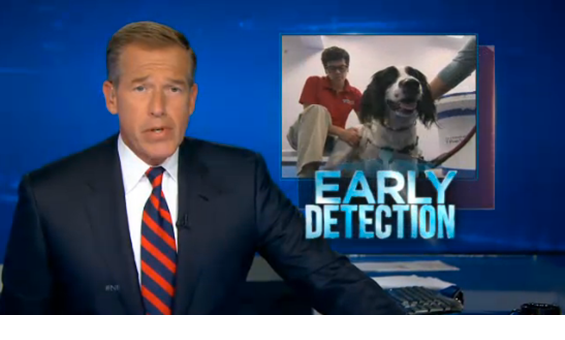 And-how does Ohlin do it?

Find out how the Penn Vet Center trains dogs to “sniff” out ovarian cancer, click here! 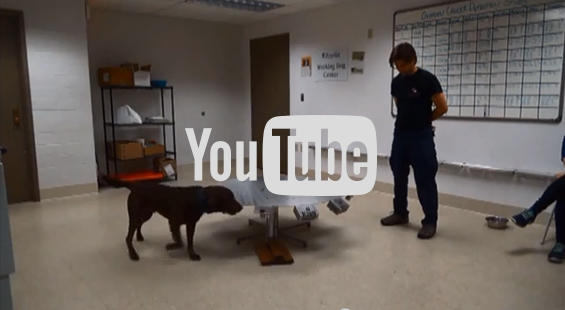 LAKEVIEW — Kramer on “Seinfeld” is not the only person to feel more comfortable with a veterinarian than a human doctor.

Dr. Natalie Marks at Blum Animal Hospital has clients ask her about their own health afflictions daily  — and many refer to that old “Seinfeld” bit, she said with a laugh.

“It’s common for clients to discuss pet health and talk about other things in their human world,” she said. “Some of which I probably can’t put into print.”

Now Blum, 3219 N. Clark St., is hoping to capitalize on that comfort to promote the health of pet owners. Starting this week, it will be the first animal hospital in Chicago to collaborate with the Ovarian Cancer Symptom Awareness program, a nonprofit that seeks to raise awareness about the silent symptoms of the cancer.

“Veterinarians don’t just hear about their four-legged friends’ symptoms. Pet owners share their own health concerns with veterinarians, putting these diversified doctors in a unique position to help, representatives say.”

The Ovarian Cancer Symptom Awareness Organization (OCSA) launched an innovative new awareness program at the 130th Annual Illinois State Veterinary Medical Association Convention in Lombard, IL on Sunday, November 4.  The OCSA Veterinary Outreach Program (VOP) mission is “fighting ovarian cancer with animal passion,” and seeks to engage and collaborate with the veterinary community members who have immediate access to individuals already inclined to discuss health issues in their presence.  The program will focus on raising awareness about the often-missed symptoms of ovarian cancer.  In addition, OCSA also announced a new veterinary medicine scholarship program that will award three $5,000 scholarships beginning in 2013.

Veterinarians speak out on ovarian cancer

To fight ovarian cancer, the Overian Cancer Symptom Awareness Organization (OCSA) is hoping that veterinarians and pets just might save the lives of their owners.

On January 25, a new Veterinary Outreach Program (VOP) was launched at  Gateway Veterinary Clinic in St. Charles and owner Dr. Kurt Klepitsch became the first member of the program, a joint effort that partners OCSA with the Illinois State Veterinary Medical Association…